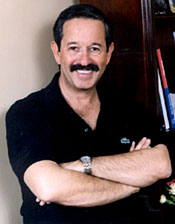 Rick Frishman
Although Jericho resident Rick Frishman has been involved in publicity for 30 years, his dream was always to become an author and he has now accomplished that feat for the fourth time – this time with the goal of helping other author wannabes.
Frishman made his author debut in 2000 when he co-authored a book entitled Guerrilla Marketing for Writers, which showed writers 100 ways to market their books, before and after they are published.

His success continued in 2002 with his second book Guerrilla Publicity: Hundreds of Sure-Fire Tactics to Get Maximum Sales for Minimum Dollar, which helped publicity seekers meet the challenge of a new decade in marketing, media relations and promotions.

His third book, which was published in 2004, combined his life experiences and professional knowledge and is entitled Networking Magic: Find the Best- from Doctors, Lawyers, and Accountants to Homes, Schools and Jobs.

His fourth and most recent book, entitled Author 101: Bestselling Book Proposals: The Insider’s Guide to Selling Your Work, which he co-wrote with Robyn Freedman Spizman, who has written dozens of inspirational and educational non-fiction books, was just published by Adams Media.

This book is the first in a series of instructional insider guides meant to help novice writers navigate the crowded publishing marketplace. Some of the industry’s most seasoned professionals explain the complex process of getting proposals into the right hands.

The Author 101 series came about when Frishman was reminiscing about his many speaking engagements and writing conventions. He realized that he should write a series of books divulging the tools and secrets on how to get published. Thus, Author 101 was born and the first book in the series, focusing on bestselling book proposals, is available in bookstores now.

Future topics in the Author 101 series will include how to find a literary agent and best-selling book publicity.

This book does not have a specific target audience as Frishman said that anyone can become an author, whether they are a ‘fitness trainer, single mom, or businessman.’ “They all have great ideas for book topics but may require a helping hand in transforming those ideas into reality,” he said. “Writing a killer book proposal is a complex process involving more than just the writer’s talent, a manuscript, and the desire to be published. Would-be writers must have an intricate knowledge of how to craft book proposals.”

According to Frishman, this ‘student’ friendly guide provides an entire education on writing a winning book proposal-from conceiving the book idea and creating an outline, to tackling the development of effective marketing strategies.

Frishman said that once someone publishes a book, they become the authority. “Your book is your business card and your credibility,” he said. “It makes you the leading authority on the subject because you wrote the book on it.”

For those who think they have something to say, but don’t think they can write it, Frishman said that is the norm. “One does not have to be a great writer to be an author – you need to know a great writer to be an author,” said Frishman. “Seventy percent of non-fiction books have ghost writers. If you have great content and want to teach something and have information that will live after you die, there are people that will help you. You have to know the system and the territory and this book is a crash course”

The American Association of Publishers and Publishers Weekly reports as many as150,000 new titles are published yearly in the United States. Additionally, 90 percent of the half-million books written annually remain unpublished. Frishman said there is a contest that can help people get published, so people don’t fall into that ’90 percent’ category.

The Author 101 “Get Published, Get Publicized” contest will give an aspiring author a chance to win a book-publishing contract and $20,000 in publicity. Proposals must be submitted by April, 2006 and the winner will be announced at the end of May. More information is available at www.author 101.com.

Frishman encourages everyone to enter because “even if someone doesn’t win the contest, they have their proposal done and they are on their way to getting published.”